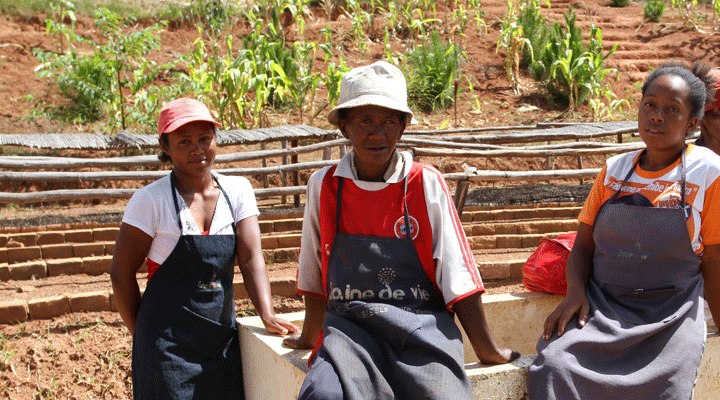 By Pranarom Canada in Spotlight on October 25, 2019

“Between two and six billion trees should be planted in Madagascar to compensate for deforestation. Let’s say the cost of a fighter aircraft.

What is at stake?

Madagascar’s biodiversity is at stake, and so that’s why it’s important to raise awareness among local populations on the importance of preserving nature in the long-term.

The NGO is currently present in 1 of 12 communes, but a lot of work remains to be done.

The passion and sense of urgency that drives its director, Frédéric Debouche: this notary tirelessly travels around the country to meet mayors, political decision-makers, local associations but also schools and of course, populations, to test new seeds, or to find concrete solutions that would make it possible to stem deforestation in a sustainable way.

We need more people like Frédéric in the world to make a real change.

SAVING TREES BY GIVING THEM VALUE

When you live only in and through nature, but with a permanent awareness of survival, it is difficult to project yourself into notions of environmental preservation.

Local populations, used to using natural resources such as wood for heating, and who practice slash-and-burn farming, did not necessarily have alternatives.

This is the genius idea of Graine de Vie.

By offering them a salary to reforest their country, they give value to trees, making planters their first defenders.

Saving trees is as important as replanting them to prevent bleeding.

Awareness-raising work with the population and in schools (among very young children who play in nurseries) is essential.

They will grow up knowing the value of saving the trees.

Even the Malagasy army finally created a nursery!

At the same time, Graine de vie is looking for sustainable alternatives to allow people to use a certain amount of firewood.

They also want to make the local population aware of the importance of choosing species that grow and reproduce on the plains very quickly.

IT’S NOT ABOUT REINVENTING THE ENTIRE WHEEL…

In order to manage the thousands of farmers across the country, Frédéric Debouche works directly with local women’s and farmers’ associations.

This allows the NGO to rely on a vast network that generates trust on both sides.

It is also an opportunity to promote a form of participatory economy in which villagers can decide which projects they want to implement for their village.

They also carry out constant research to increase the rate of planting by avoiding, for example, when possible, the use of nurseries.

OUR COMMITMENT TO HELPING FRÉDÉRIC WITH HIS MISSION…

Pranarom supports Graine de vie in its reforestation project and will continue to do so long into the future. This is a long-term mission that is vitally important to the entire Pranarom team.

Graine de Vie also advises farmers to generate financial added value by opting for the sustainable cultivation of cash crops such as fruit trees, those that can be used as construction equipment or those used to produce essential oils.

Faithful to its values of preserving the environment, people and precious raw materials, Pranarom has always made sure to create contacts with producers and growers directly in the field.

Convinced by the NGO’s work, which it was able to observe directly on the spot, the company naturally agreed to support it. For every Aromaforce sanitizing spray purchased, Graine de vie replants a tree.

A fine example of successful synergy, where the search for solutions has led to positive and sustainable results for all!

Search
Recent Posts
Categories
Shop
Join the PRANA CLUB to be signed up to all future giveaway contests!
JOIN NOW